How to design handwoven cloth that looks good at any distance

Sometimes creating handwoven fabrics feels like wrestling mischievous imps. A project that looks gorgeous in the initial sketch, or in a weaving software simulation, turns into a muddy mess when woven. A garment that looked great while you were sewing it blurs into shapelessness from across the room. Figuring out what happened can feel hopeless.

Many times, though, the problem is pretty simple: You’ve designed at the wrong scale. Your design is either too large or too small to look attractive when a viewer looks at the finished piece. So your colors blur together or become too bold, and your piece just doesn’t look right. And, if you viewed your sketches or draft the way most people do – close up – you probably didn’t notice there was a problem, because you were seeing the design at the incorrect size.

Here’s how to design a piece at the right scale, whether it’s meant to be seen from six inches or sixty feet away.

Scale determines what you see

The scale of a design controls how you see it. If a pattern is so small the eye has trouble perceiving it, the colors in the pattern will look like a single color. This effect is called optical mixing. (You can read more about optical mixing and its counterpart, simultaneous contrast, in this blog post.)

The Impressionists applied optical mixing beautifully in their paintings. Claude Monet’s painting Haystacks (Sunset) appears to use solid, or near-solid colors at a distance:

But when viewed close up, the apparently solid colors show themselves to be many tiny dots of color. Here is a close-up taken near the bottom left corner of the haystack.

Whether you see many small splotches of color or a landscape painting depends on how close you are standing. This painting looks radically different when the viewing distance (and thus the scale of the dots) changes.

You can see a similar effect in these handwoven lavender sachets. These are woven using 60/2 silk as warp and rayon machine embroidery thread as weft.

From a distance of several feet, each of the sachets appears to be a solid color with a design of diagonal squares:

But at a distance of a few inches, you can see the different colors interlacing in plain weave.

Designs that look good close up, where detail is readily perceived, often blur at a distance. Conversely, large-scale designs may look good at a distance, but seem overwhelming or garish when viewed nearby.

Yarn size changes the scale of your design

Yarn size plays a large factor in the size of a handwoven fabric design. Fine yarns will produce a smaller, more subtle design than thick yarns when woven using the same draft and colors.

For example the photo below shows two pieces of fabric, woven using the same draft. The image shows the swatches as they appear from three feet away. The top swatch is woven in 120/2 silk (30,000 yards per pound/15,000 m/g) in both warp and weft. The bottom swatch uses much thicker yarns, about 2,500 yards per pound/1,250 m/g.

However, when viewed from 10-15 feet away, the designs look quite different.

At the smaller scale, optical mixing has blurred the black and white design into a nearly solid gray. In the bigger sample, however, the red and black patches color remain distinct, the pattern shows clearly, and the cloth looks great.

View your designs at their finished scale

Because scale has such a profound impact on color and design, it’s important to check your drafts at the right scale when designing handwoven cloth. For example, napkins are typically viewed from 2-3 feet away, either on the table while sitting down, or in your lap while eating. So when evaluating a draft for napkins, you’ll want to view the draft as the finished napkin would appear from three feet away. But when evaluating a wall hanging, you’ll want to consider how it looks from across the room.

One common mistake is to look at drafts at a size that makes it easy to “read” the threading and treadling, but which is larger than the finished fabric. While it is easier to design drafts close up, you’ll need to scale down to the size of your finished piece, at the distance from which people will see it.

For example, here’s the draft used in the previous samples. The treadling, threading, and tie-up are clearly visible, making it a good scale for editing.

However, as we’ve seen, the finished fabric can look very different depending on the yarns and viewing distance. For the sample in finer yarns, viewed at three feet away, evaluating the design at this scale would be more appropriate:

And of course, if viewed from further away, the draft would need to be scaled down even further.

Evaluating the draft at the correct viewing size becomes even more critical when envisioning color combinations. For example, here is the same draft, in red and green, at a large scale.

At this scale, the red and green yarns appear visually distinct, and the piece is bright and energetic. To many people, it probably looks garish.

However, when viewed at a smaller scale, as the draft would look if woven in fine threads or seen from further away, the draft looks like this:

Now the bright colors have blended into mud!

To avoid unintentional mud, make sure you preview your design at the correct scale before warping your loom. Weaving software makes this easy, but if you don’t have software, you can take a photo or screenshot of your design, then zoom in and out while viewing your photo to enlarge or reduce the design.

Some pieces need to look good both close up and far away. For example, a tapestry might be viewed from across the room, or it might be inspected from nearby. A garment destined for a fashion show needs to look good on the catwalk, 30 feet away. But it also needs to look good when exhibited later, where it will be seen from a few feet away.

However, most handwoven garments are woven from relatively fine threads, using a draft with short repeats. This produces exquisitely detailed fabrics that look great close up. But at 30 feet away, small, detailed patterns blur or become invisible, and the garment looks boring. As a result, handwoven garments often don’t look good in fashion shows.

To solve this problem, you simply need to design at two scales – one for nearby viewers and one for people further away. My Kodachrome Jacket shows one way to do this. Here it is, photographed from about 10 feet away:

At this scale, the patches of color from the painted warps dominate the design. Because they stand out clearly from a distance, the jacket will look good even 30 feet away on a fashion-show catwalk.

Up close, however, the intricate handwoven design becomes visible:

Because it is designed at both large and small scales, Kodachrome offers something to both distant and close-up viewers. That’s one reason it was featured on the cover of the September/October 2011 issue of Handwoven – a winner in Handwoven’s 2011 Garment Challenge. 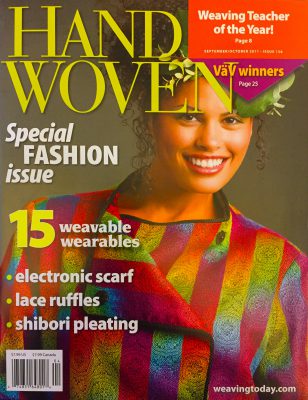 I hope you have found this post useful! If you would like to get notification of new blog posts and upcoming classes, please sign up for my newsletter (and my free e-book!) using the links below. And, of course, please feel free to share on social media, such as Facebook, Twitter, or Pinterest, by clicking on the buttons below this article. 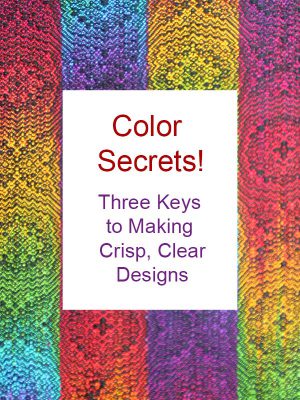